Embark on a 17 day tour encompassing the best that South Africa has to offer in way of scenery, wildlife and culture between Johannesburg and Cape Town. Experience all that Cape Town has to offer, including the Winelands, Peninsula & City Tour, visit a working ostrich farm in the feather capital of the world, Oudtshoorn and travel along the magnificent Garden Route. Experience Swazi and authentic Zulu culture, search for the Big Five in the world renowned Kruger National Park and the Hluhluwe Reserve. Travel along the awe-inspiring Panorama Route and the ‘Land of the Rising Sun’.

Enjoy all of this and superb cuisine, luxurious accommodation and true South African hospitality throughout your journey.

Morning arrival and transfer to Quatermain Faircity Hotel or similar for a one night stay. The rest of the day is at leisure.

Depart Johannesburg and travel to the ‘Land of the Rising Sun – Mpumalanga – via the magnificent Panorama Route. The most spectacular stretch of the Panorama Route is the Blyde River Canyon. From many well-positioned vantage points one has a view of the 33 km long gorge, which starts at “Bourke’s Luck Potholes” and ends at the “Three Rondavels”. Time and weather permitting, stop at God’s Window. Late afternoon arrival at Perry’s Bridge Hollow or similar. Check in and freshen up before dinner.

After breakfast, travel to the Royal Kingdom of Swaziland. This tiny mountainous kingdom is filled with bygone African traditions and culture and offers beautiful scenery and attractions such as game reserves and art & craft outlets to name a few. Enjoy a showcase of the traditional Swazi culture followed by a traditional lunch at the Matsamo Cultural Village. Continue to the Ngwenya Glass Works to see master craftsmen create beautiful sculptures and artwork from molten glass. After spending some time at the craft markets, arrive at the Royal Swazi Spa or similar. Dinner is to your own arrangements.

Depart the hotel after breakfast. Enjoy a morning visit to the Swazi Candle Factory where each candle is made and finished by hand using the age-old technique “millefiore”. No two are the same and the range boasts an astonishing array of patterns, shapes and designs. Continue via Big Bend into KwaZulu Natal. Arrive at Ghost Mountain Inn in the afternoon, in time to embark on an afternoon scenic drive up the Ubombo Mountains, offering views over Lake Jozini. At the summit and as the setting sun transforms the sky into a tapestry of colours, stop for sundowners. The drive will be combined with a visit to a local and authentic Zulu homestead for a glimpse into Zulu life in today’s world. Return to the hotel for dinner.

Enjoy the morning at leisure to embark on any of the activities on offer from the hotel.

Day 8The Benjamin or similar, Durban

The Benjamin or similar, Durban

Morning departure straight after breakfast. Continue the journey along the Elephant Coast of KwaZulu Natal to St Lucia which is located at the southern extremity of the iSimangaliso Wetland Park – a World Heritage Site. Here you embark on an estuarine boat trip which provides an opportunity to view crocodiles, hippo and numerous bird species, including the elusive African Fish Eagle, in their natural habitat. Continue to Durban for afternoon arrival at The Benjamin or similar. Dinner is to your own arrangements.

Depending on the departure time of your flight, embark on a morning city tour of Durban, a tour dedicated to the discovery of the cultural & historical contrasts of this cosmopolitan city where east meets west. Drive along Durban’s distinctive beachfront, the Golden Mile, past the art-deco buildings and uShaka Marine World to The Point at the harbour entrance. Drive along Victoria Embankment and through the city past buildings of historical significance such as the Natal Museum, City Hall and the Play House Theatre.

Proceed to King Shaka International Airport. Check in for your domestic flight to Port Elizabeth. On arrival at Port Elizabeth Airport, you shall be met by a local representative and transferred to the Radisson Blu Hotel or similar. Remainder of the day at leisure. Dinner is to your own arrangements.

Depart Port Elizabeth and travel via the coastline to the beautiful Tsitsikamma National Park. Described as the ‘garden of the Garden Route’, the Tsitsikamma actually deserves a more vivid description to encapsulate the beauty of the place. Enjoy a walk along the suspension bridge across the Storms River mouth gorge which offers visitors incredible views and photo opportunities. Continue to Plettenberg Bay for dinner and overnight. Overnight at Hunter's Country House (standard room) or similar.

After breakfast visit Birds of Eden, the largest free-flight bird aviary in the world. Proceed to Hog Hollow Horse Trails for a horse-drawn carriage and wine tasting experience followed by lunch (to own account). Return to the lodge for the remainder of the afternoon at leisure before dinner. Optional: discuss the availability of additional activities on offer in the area with your guide.  Overnight at Hunter's Country House (standard room) or similar.

After breakfast and check-out formalities, proceed on an informative cruise up the Keurbooms River. Continue to the lagoon side town of Knysna – the gem of the Garden Route. Enjoy some time at leisure at the Knysna Waterfront Complex before travelling to Oudtshoorn – the ‘feather capital’ of the world due to its large ostrich industry. Visit a working ostrich farm for a guided tour. Check into your accommodation in the late afternoon before enjoying dinner. Overnight De Opstal Country Lodge (standard room) or similar.

Breakfast and check-out of the hotel. Enjoy a morning tour of the Cango Caves before departing Oudtshoorn. The Cango Caves is one of the natural wonders of the world and has become a major draw-card to the Karoo area. Afterward, travel via Route 62 to Barrydale for lunch (to own account). Arrive in Cape Town around 17h00. (Dinner is to your own arrangements.) Overnight at Southern Sun Waterfront (standard room) or similar.

This morning you will be collected for your scheduled full day Cape Point & Peninsula Tour. We travel along the Atlantic Seaboard via Sea Point, Clifton and Camps Bay, stopping at a Llandudno look-out point before continuing to Hout Bay, a quaint village and fishing harbour with magnificent mountain views and beach (optional boat trip to Seal Island – to own account). Continue via Chapman’s Peak, one of the world’s most breathtaking coastal drives, to Cape Point and the Good Hope Nature Reserve. After lunch at a nearby restaurant (not included in cost), we go on to historic Simon’s Town – a village with charming Victorian architecture, a naval base and a large penguin colony at the beautiful Boulders Beach. Boulders Penguin Colony is home to a growing colony of the vulnerable African Penguin. Wooden walkways allow visitors to view the penguins in their natural habitat and there is also a new information centre. End the day with a visit to Kirstenbosch Botanical Gardens which is world-renowned for the beauty and diversity of the Cape Flora it displays and for the magnificence of its setting against the eastern slopes of Table Mountain. The tour ends upon return to your hotel during the late afternoon. Overnight at Southern Sun Waterfront or similar. 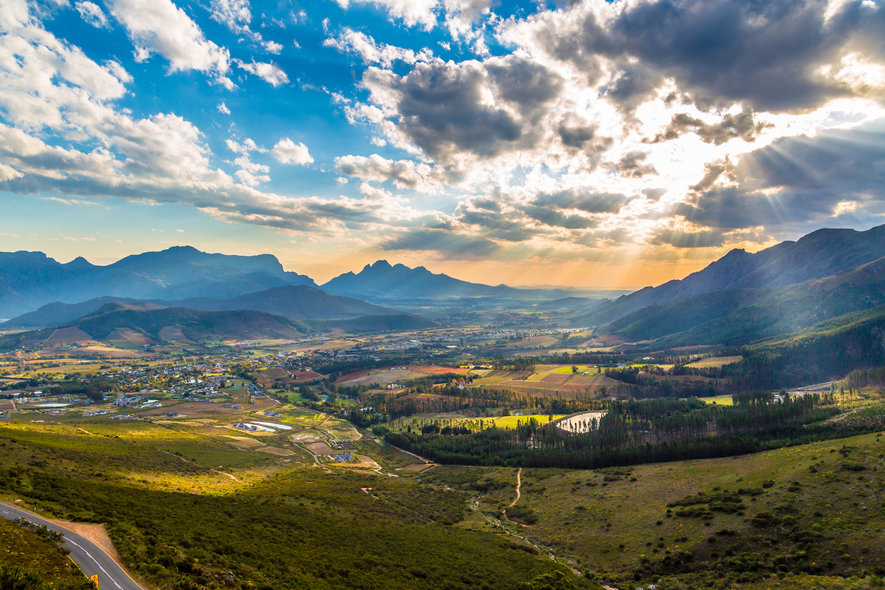 Today you embark on a scheduled full day Cape Winelands Tour. This is a delightful drive, which winds its way to the heart of the Cape Winelands through superb mountain ranges, vineyards and Cape Dutch homesteads. Head off to the wine country via the N2 to the heart of South Africa’s wine industry, Stellenbosch, boasting great beauty and culture that is steeped in South African history. With the sheer vastness of wine estates on offer, we are truly spoilt for choice when we enjoy our first wine tasting of the day. Travel over the Helshoogte Pass to the town of Franschhoek. Billed as the Gourmet Capital of South Africa, this charming town, in a most picturesque valley, retains a French Huguenot style. We enjoy a wine tasting before taking time to enjoy the fabled culinary skills of the Franschhoek chefs at one of the many award winning restaurants (lunch to own account). Time permitting, a visit to a Paarl region estate would be included to round off the day’s wine-tasting experiences before heading back to Cape Town. Overnight at Southern Sun Waterfront or similar.

Breakfast at the hotel. Morning collection from the hotel for a scheduled City Tour – a geographical and cultural extravaganza showing you Cape Town from its historical beginnings to modern buildings and malls. The tour commences with a tour of Table Mountain (weather permitting; cable car fee not included). In the city itself, we visit the Company Gardens, the S.A. Museum, the Castle of Good Hope and the vibrant and arty flea market, Greenmarket Square. We take a trip through the picturesque Bo-Kaap, where we discover the unique culture, lifestyle and personality of the Cape Muslim community and their contribution to South Africa’s development. You will be dropped off at the hotel by 12h30.

In the late afternoon, transfer to Cape Town International Airport and check in for your onward overnight flight.

Chris joined Africa Travel directly from university in 1992 and knows both the company and Africa extremely well.

Felicity, who joined Africa Travel in 2004, has worked in the travel industry for over 30 years and originally comes from South Africa's KwaZulu Natal province

Emma got a taste of travelling when she was young, she has been travelling all around the world. However it was in Africa where Emma found her heart.

Melissa joined Africa Travel in 2015, having worked in the travel industry for 10 years. Born and bred in Cape Town, South Africa, Melissa's favourite destinations are Victoria Falls, Zimbabwe and the Garden Route.

Shaun joined the travel industry just over 10 years ago, working first for an online travel booking portal and an ecotourism company, specialising in sustainable travel in Southern and East Africa.

Debbie joined Africa Travel in May 2009 and has been in the travel industry for over 20 years, enjoying a number of roles, from airline ticketing to accounting.

Christine first came to Africa as a young woman and immediately felt a connection which has never allowed her to leave. She lived in Johannesburg and in Knysna on the Garden Route, but came to Cape Town 22 years ago and realised it was where she wanted to be!

Alyson grew up in Zimbabwe and it was her parents who influenced her a great love of the African bush. It was not just a love of the wildlife but the plant and bird life and everything that is associated in the wild spaces of Africa.