This is the ultimate voyage to discover the unique and beautiful mountain gorillas of Rwanda. Starting in the modern and cosmopolitan capital of Kigali, you will then be transferred to the ultra-luxurious Bisate Lodge to begin your gorilla trekking adventure. This is a once in a lifetime holiday that you will never ever forget. 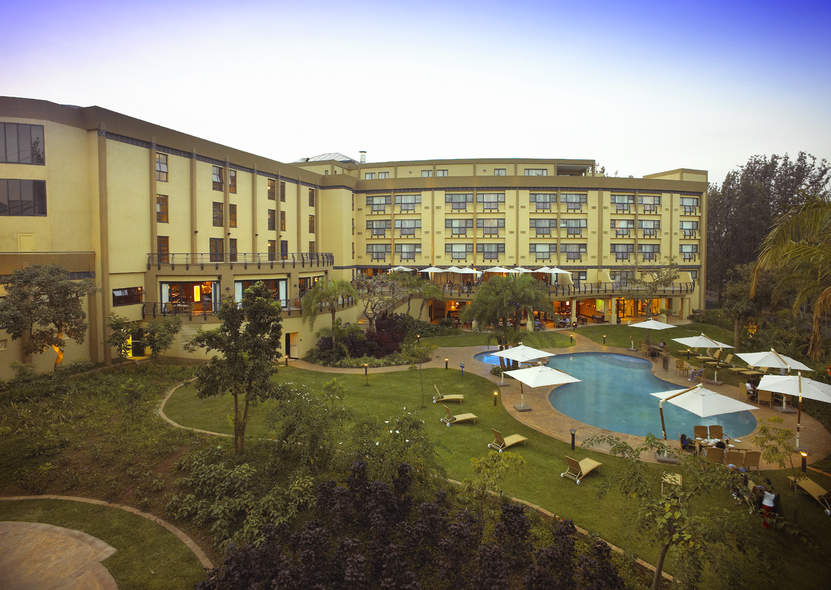 On arrival in Kigali you will be met by a representative from Thousand Hill Africa who will assist you with customs and immigration while you enjoy a cup of coffee at the VIP Lounge thereafter you will be handed over to your guide who will transfer you to the Kigali Serena Hotel for an overnight stay.

The history of Rwanda dates back centuries, Kigali has been a part of it for a hundred years. Founded in 1907 as a German settlement, Kigali did not become the capital until Rwanda’s independence in 1962 when it replaced the colonial seat of power in Butare. Since then, the city has seen major economic development resulting in what it is today; a vibrant African city of 1 million with wide boulevards, an international airport, world-class hotels and restaurants, crafts & curio shops as well as a lively, cosmopolitan population. Visit the Kandt Museum, tour old Kigali and the Craft centres, visit the genocide memorial site where you learn about Rwanda’s history pre-colonial to 1994 genocide as well as other genocides in the world. Tour more and see the new developments; the recovery has been incredible, a true testament to humankind’s resilience. 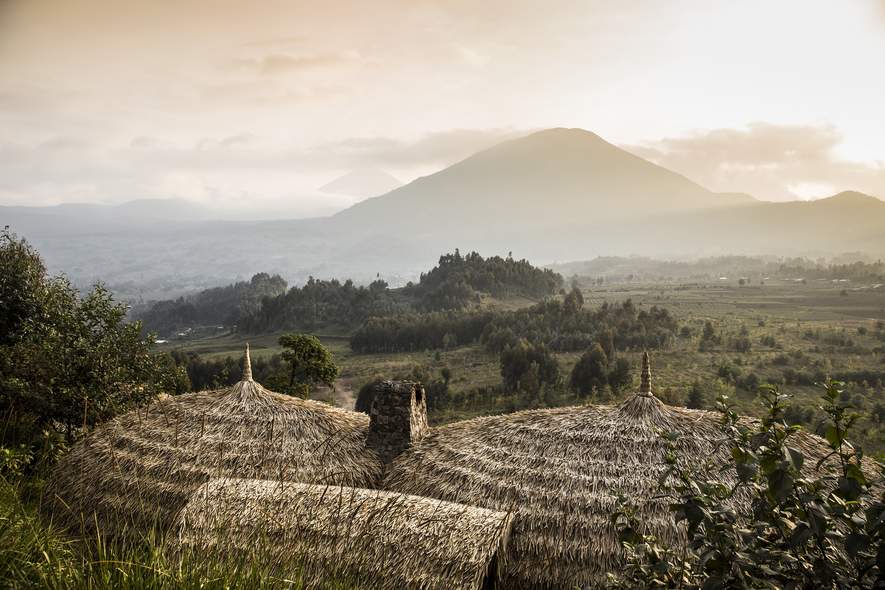 This morning you will be collected from Kigali Serena hotel and taken of Kigali before transferring to Bisate Lodge where you spend the next three nights.

Situated within the amphitheatre of an eroded volcanic cone, the 27-hectare Bisate site is incomparable in terms of its natural splendour, with sweeping views towards the Karisimbi, Bisoke and Mikeno volcanoes. The lodge is close enough to Kinigi (the Volcanoes National Park Headquarters) to be convenient for morning gorilla treks, but far enough away so as to feel remote and even – as a result of the onsite indigenous reforestation project – part of the spectacular park. 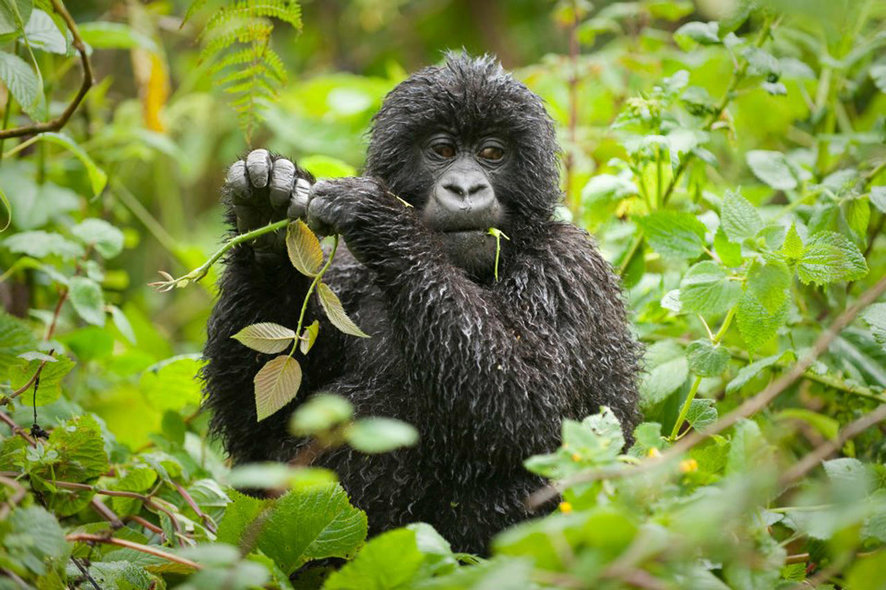 At 6am you will be collected from Bisate lodge and taken on a Gorilla Tracking excursion.  Your exhilarating trek, in the footsteps of the rare and critically endangered Mountain Gorillas, the largest living primate on earth, starts in the cultivated foothills of the Virungas with stirring views in all directions. Upon entering the national park, her paths littered with fresh spoor of the mountains’ elusive buffalo and elephant, trekkers will be immersed in the mysterious intimacy of the rainforest, alive with colourful bird calls and butterflies.

Upon sighting the gorillas, you will stay with them for a magical hour as they go about their daily life, feeding, playing, resting; raising their young. Coming face to face with a giant silverback must truly be one of the greatest wildlife experiences on earth!

After the trek you return to Bisate Lodge for lunch followed by a Nature Walk.

Early in the morning you will be collected from Bisate lodge and taken on a Golden Monkey Tracking expedition.

The very beautiful Golden Monkey has a golden body, cheeks and tail with contrasting black limbs, crown, and tail-end. Not much is known about their behaviour; other than they live in social groups of up to 30 individuals and their diet consists mainly of leaves and fruit - it is believed they eat insects too. Restricted to the highland forest of the Virungas especially near bamboo, they share this habitat with their big Brother the Mountain Gorilla, inhabiting a small area that overlaps the territory of one of the Gorilla families Together, they face the same threats; snares, human encroachment etc. and are listed on the IUCN Red List of critically endangered species.

Tracking usually takes from 2 to 4 hrs. Once you come to the families, you will spend one hour with them as they go about their daily life; adult monkeys frolic in plain view, feeding on bamboo leaves and leaping from perch to perch while females carry their young, completely oblivious of on-lookers.

You return to Bisate Lodge for lunch after which you embark on a tour to the Caves.  Located in the Musanze district and formed over centuries of volcanic activity from the Virunga volcanoes, these caves give tourists a rare look into Rwandan earth and history. The 1.25 mile long cave formations are a great place to explore. The guided tours explain the history of the caves from their formation to their various uses in history for example, during times of war they were used as a shelter. Tours of the caves take approximately 2.5 hours and are a great add-on activity.

Transfer back to Kigali this morning for your flight to London Heathrow via Amsterdam.

Chris joined Africa Travel directly from university in 1992 and knows both the company and Africa extremely well.

Felicity, who joined Africa Travel in 2004, has worked in the travel industry for over 30 years and originally comes from South Africa's KwaZulu Natal province

Emma got a taste of travelling when she was young, she has been travelling all around the world. However it was in Africa where Emma found her heart.

Melissa joined Africa Travel in 2015, having worked in the travel industry for 10 years. Born and bred in Cape Town, South Africa, Melissa's favourite destinations are Victoria Falls, Zimbabwe and the Garden Route.

Shaun joined the travel industry just over 10 years ago, working first for an online travel booking portal and an ecotourism company, specialising in sustainable travel in Southern and East Africa.

Debbie joined Africa Travel in May 2009 and has been in the travel industry for over 20 years, enjoying a number of roles, from airline ticketing to accounting.

Christine first came to Africa as a young woman and immediately felt a connection which has never allowed her to leave. She lived in Johannesburg and in Knysna on the Garden Route, but came to Cape Town 22 years ago and realised it was where she wanted to be!

Alyson grew up in Zimbabwe and it was her parents who influenced her a great love of the African bush. It was not just a love of the wildlife but the plant and bird life and everything that is associated in the wild spaces of Africa.

Africa Travel is the UK's premier specialist dealing with travel to Africa, but we aren't just a website or a call centre, we are a boutique, owner-run company with personal connections to many of the owners of the properties we feature.

During these challenging times many of us are understandably concerned about the impact and effect of Coronavirus on our travel plans, and so to offer you complete reassurance, Africa Travel have put in place our very own Book Africa with Confidence policy.

All flights and flight-inclusive holidays on this website are financially protected by the ATOL scheme. Our ATOL number is 3384 www.atol.org.uk/ATOLCertificate